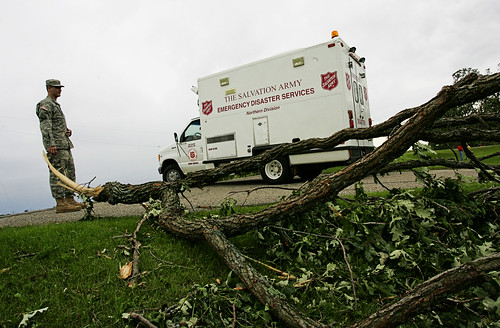 From Roseville, MN Salvation Army Northern Division – The Salvation Army continues to provide food and emotional support to communities across Minnesota after numerous tornadoes touched down in the northern and southern portions of the state on June 17.

In the north, more than a dozen Salvation Army volunteers from Fargo and Fergus Falls arrived in Wadena last night with two mobile feeding units packed with food and beverages. They have since been providing round-the-clock service to survivors and relief workers in Wadena and surrounding communities. Local businesses have been giving The Salvation Army extra food and water to distribute.

“Things have been going smoothly so far,” said Howard Scheuring, a Salvation Army volunteer from Fargo.

In the south, as many volunteers from the Twin Cities, Albert Lea, Mankato and Rochester have been using four mobile feeding units to serve relief workers and survivors in Albert Lea, Ellendale, Geneva, Kiester and elsewhere.

“We served hot dogs to about 110 people throughout the night,” said Twin Cities Salvation Army volunteer Frank Powers, who staffed a mobile feeding unit in Ellendale early this morning from 12:30 a.m. to 9 a.m.

The Salvation Army will continue to support tornado survivors and relief workers for as long as needed. Donations designated “Minnesota Tornados” can be made by calling 800-SAL-ARMY. Checks made out to The Salvation Army may be sent to 2445 Prior Ave., Roseville, MN 55113.