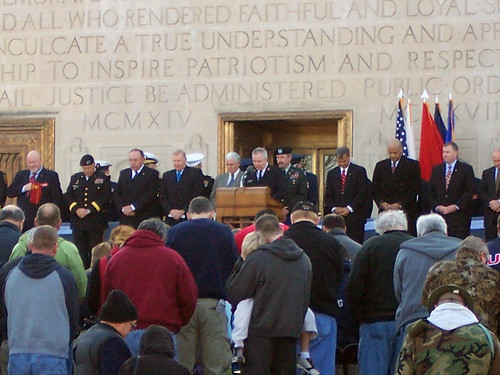 Flags were proudly displayed throughout the country today at half-staff, honoring America’s 23.2 million veterans (US Census Bureau 2008). The Salvation Army joined the Veteran’s Day celebrations at a remembrance ceremony in downtown Indy followed by a parade and by preparing Christmas Care Packages for military personnel serving overseas.

Major Amick, flanked by service personnel and city officials, led the crowd in prayer under sunny skies and a flyover by four F-16s from the 122nd Fighter Wing of the Indiana Air National Guard in Fort Wayne. Thousands attended the ceremony and went on to march in the parade in support of those who have served and have given the ultimate sacrifice. 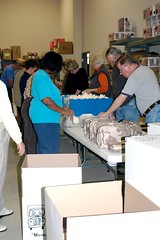 Meanwhile, in another part of the city, volunteers for Operation Compassion were busily packing camouflage bags with toiletries and other items meant to express love from the homefront for Christmas. 1,033 packages were readied to be shipped to service men and women in just 2 hours’ time. “It’s kind of fun to do it on Veteran’s Day – especially since some of our volunteers are vets”, said Delana Bradbury, Operation Compassion Coordinator.

Operation Compassion, a program of the The Salvation Army, has sent 80,083 packages since it began in 2002. It is the only program that exists within the framework of The Salvation Army that sends care packages to our troops overseas. The next preparations will begin sometime in January, with the goal of a Valentine shipment. If you are interested in donating or helping with the packing efforts, go to www.SAOpCom.org for details.