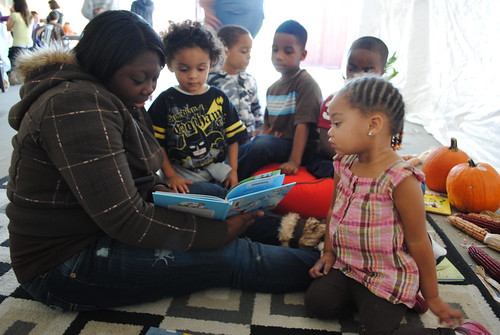 Chris Moore, teacher at Lynhurst 7th & 8th Grade Center, told his students to “think BIG!” on a service project they were proposing. As it turns out, their idea was to treat children, through several local non-profit organizations,  to  lunch, crafts, storytime and a day at the zoo.

Using a grant award from Wayne Twp. Schools and Centerplate, which the students spent about 20 hours working on, they planned and carried out the event last week for a group of 14  from our shelter.

The Indianapolis Zoo donated the tickets for the children to enter the park that day. Lunch was served under a big-top tent, decorated with paper lanterns and table centerpieces that the students made themselves. One group of students performed inspirational songs, followed by pumpkin painting, storytime and making paper masks. After the program, the children were free to visit the animals and exhibits at their leisure with their groups.

Later in the week, Salvation Army staff visited the school to collect a donation from the students’ canned food drive, which also was to benefit TSA’s food pantry. There were over 600 kids that participated in the food drive. Their goal was 600 cans, but they collected over 1,100.  Students from the two winning homerooms will be given a pizza party in November as a reward and have become Bite Back Brigade members in support of the Homelessness Bites campaign.