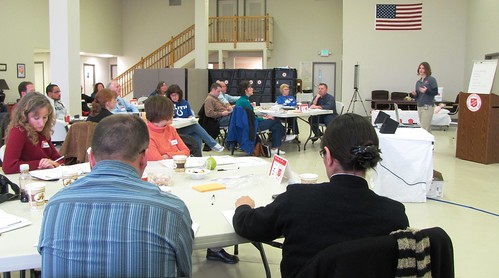 Elizabeth Wilhelm teaches attendees on how to be part of a The Salvation Army's emergency disaster team.

“An occurrence that causes or creates human suffering that victims cannot alleviate without assistance,” explains Emergency Disaster Service Coordinator Bert Williams about The Salvation Army’s definition of disaster. Williams was just one of the three trainers during an emergency disaster training session Saturday, Jan. 23, 2010 with an attendance of 25 trainees hoping to be able to help in disaster relief one day.

Another trainer was Salvation Army Volunteer Coordinator Elizabeth Wilhelm who went into explaining what responders should expect when they go to serve. Normally the training sessions are led by Jerry Larsen, one of Indiana’s most knowledgeable disaster responders, but he left for Haiti earlier this week with Salvation Army Captain Marcos Ramirez and Geff Crowell. They won’t be relieved until two weeks by another Salvation Army disaster team.

But attendees received the guidance from another very knowledgeable trainer. Rush Yelverton has been helping with Emergency Disaster Services for years. He’s helped during different floods in Indiana, he spent two weeks in New Orleans after Hurricane Katrina, he was there when the tornado swept Evansville and he helped during the heat wave in Kansas City.

Also among the trainees was Lieutenant Catherine Fitzgerald of the Bloomington Corps. She has been to Haiti in the past and hopes to go again to help with the relief.

The class’s intent is to teach the necessary skills needed to become an effective responder in such disasters as the recent Haiti earthquake. Anyone who goes with The Salvation Army’s disaster team to Haiti will need such training.

Those who trained today may not be able to make the list to help in Haiti soon, but it’s predicted that the country will need disaster teams and volunteers for years to come. Another training session is scheduled for Thursday, Jan. 28, 2010.