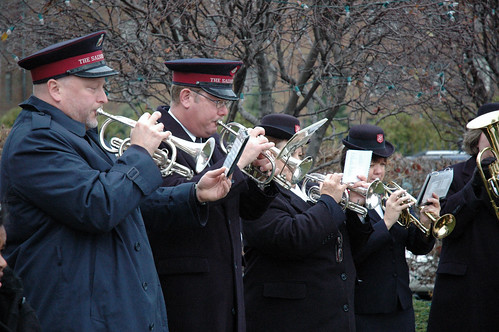 The Salvation Army Band opened the Tree of Lights Kickoff with some familiar Christmas Carols.

“Last year, because of the overwhelming generosity of Hoosiers like you, nearly 37,000 people received assistance from The Salvation Army,” Major Vicki Amick, leader of The Salvation Army’s Indiana Division, said to attendees.

The goal is a direct response to a 19 percent increase in request for assistance that the Salvation Army has seen in 2009. The money raised will go towards supporting Salvation Army programs and services throughout Central Indiana.

“Three million was pretty intimidating when we first heard about it, but that’s what I thought last year when we were saying 2.8 or 2.9 million,” WISH-TV 8’s News Anchor Eric Halvorson said. “So somehow every year it seems to get done and we see the generosity of central Indiana.”

Halvorson has been the honorary chairman for the Tree of Lights campaign for the last 4 years running.

“Well I love being apart of the kettle campaign,” said Halvorson. “It’s an opportunity for us, in a way, to say thank you to our viewers because they are a big part of our lives… They support us and we enjoy the opportunity to return the favor, and to support the community.”

Christmas music at the ceremony was performed by the Salvation Army Brass Ensemble and the 7 year returning children’s choir, St. Richard’s School singers.

John Elliot, Kroger’s manager of public relations, announced the goal of increasing the amount of money raised outside Kroger stores by 30 percent through red kettles. Elliot made the point that though the economic times are tough, people are being even more generous.

Walmart Market Manager Jerome Rauch was at the event to present a check for $7,500 to the Salvation Army. Wal-Mart also donated the Christmas outdoor decoration displayed at the event.

“It’s my first time here helping out the Salvation Army,” Rauch said. “It’s the first of many.”

Other special guest for the Tree of Lights Campaign include the Pacers’ Quinn Buckner, Terri Stacy and Joe Staysniak of the WIBC Morning Show, owner of Ricker Oil and am/pm Convenience Stores Jay Ricker, GFS, BP, Two Men and a Truck, Store and Move, Dunkin’ Donuts for their donated coffee and donuts, and Barth Electric for their sponsorship lighting of the Christmas display.

The ceremony proceeded with a $5 homemade soup and chili lunch provided by The Salvation Army’s Women’s Auxiliary.