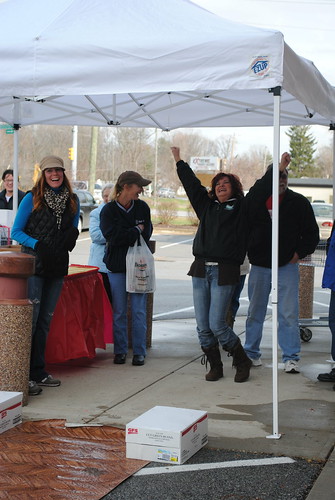 Turkey bowling requires only 3 things: a willing set of human hands, a frozen turkey, and a slippery surface from which to launch said frozen turkey. It may also require repeating your offer – “Would you like to bowl with a turkey?” to unbelieving folks – which we did a lot on Saturday, at GFS Marketplace in Avon. In this case, the slippery surface was a large remnant of linoleum laid out in the parking lot.  It’s was just for fun, but it did get a lot of  attention and a fair amount of donations at our Red Kettle.

Shoppers could take a shot at heaving the 15 lbs of meat towards the bowling pins in exchange for donating to the kettle. It’s also known as Doing the Most Good. And perhaps doing a little good for your own sanity while negotiating the traffic snarls on Indy’s west side. GFS even threw in the bait of a raffle for a complete Thanksgiving meal – one ticket per donation to The Salvation Army. Shoppers could also enjoy hot chocolate or coffee provided at our EDS Canteen parked nearby.

In addition to the Avon GFS, turkey bowling could be found at the annual Turkey Fest at Sullivan’s Hardware on 71st and Keystone.  Owner Pat Sullivan is also one of the host of the Home & Garden show on WIBC.  The show was broadcast live from Sullivan’s and The Salvation Army was invited to talk about this year’s Tree of Lights campaign and the upcoming Radiothon.