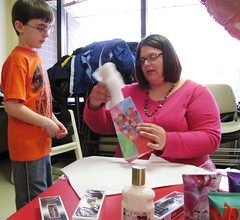 Members of Indian Creek Christian Church put together a party for the Women and Children's Shelter where they helped kids give Valentine's Day gifts to their moms.

The stories of residents at The Salvation Army Women and Children’s Shelter are usually sad ones. Most of the residents – many are mothers and their children – come to the shelter as a last resort because they are homeless or fleeing abusive domestic situations. To celebrate Valentine’s Day may be especially hard for some of these mothers.

Residents sat excitedly in the lobby of The Salvation Army’s Social Services Center Feb. 13, 2010 to await a Valentine’s Day party. In the room down the hall, 12 members of the Indian Creek Christian Church were setting up the last minute preparations to make this a day that would brighten the spirits of those who have endeared so much. In the room were tables for making cards and picture frames, a table for icing cookies and a gift table.

Different groups throughout the year put on such events as this one. It’s a way for residents to be able to get out of their rooms and associate with other residents.

“I think it shows clients that people care”, said Julia Sipes, special projects coordinator for the shelter. “It gives them something to look forward to.”

Indian Creek Christian Church member Lesa Caldwell has helped with events for the shelter before. Her bible study group thought of the idea of a Valentine’s Day party for the shelter. They wanted to make this a positive day for the residents.

Caldwell’s 8 year old son was helping at the party by wrapping the gifts at the gift table, where kids could select a Valentine’s Day present for their moms. The church members realized that some mothers didn’t currently have photos of their children to be put in their decorated frames, so they were taking photos at the party for the frames as well. The church also brought several bags of clothing and supplies for the shelter.

Caldwell said that this event has been a way for the group to “move outside the walls of the church to serve God.”

The party was successful with about twenty residents attending. *Sharron and her grandchildren are residents at the shelter escaping a bad situation. “I love it,” Sharron said about the party. “We are so grateful.”

*Susan, another shelter resident, also came to the party. She’s staying at the shelter because she has nowhere else to go and has no other family with her. She calls the events like the Valentine’s Day party as a way to distract her from the situation that she’s in. “When you’re here [at the party] you don’t think of where you are,” said Susan.

For further information on how you can put on an event for the shelter, contact Julia Sipes at 317-224-1067.

*Names have been changed to conceal the identity of the residents.