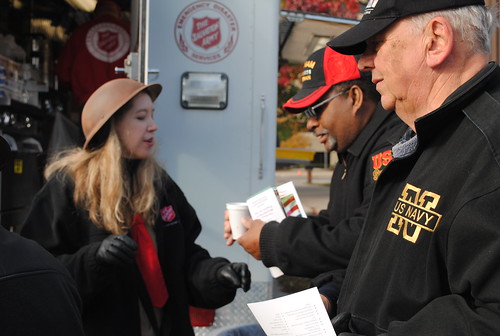 Hot chocolate and coffee were in high demand today at the Veteran’s Day Service where hundreds gathered outside the Indiana War Memorial. The Salvation Army’s Doughnut Girls were serving the warm drinks as fast as the volunteers on the canteen could brew them.  Frigid wind didn’t prevent Hoosiers from coming out for this annual ceremony to remember those who have served and are still serving.

The Salvation Army Indiana Divisional Commander, Major John Turner, opened with a memorial prayer. Mayor Greg Ballard, Brig. Gen. J. Stewart Goodwin, USAF (Ret), and Maj. Gen. R. Martin Umbarger, The Adjutant General, State of Indiana followed with messages, including a challenge for all veterans to document and tell their stories – to not let history be rewritten or the past be forgotten.

I saw fathers with young sons, pointing out and explaining flags, military vehicles and personnel. I witnessed humility, grace and appreciation on the faces of veterans as they were given something as simple as a free cup of coffee from The Salvation Army. Crowds lingered after the service for the parade, waving their flags and saluting the military branches represented. Once again, I was impressed with the patriotism shown in this mid-western state of ours. Way to go Hoosiers, for honoring our Veterans! And a heartfelt thank-you to the men, women and families who have answered the call to serve their country! May God Bless You!