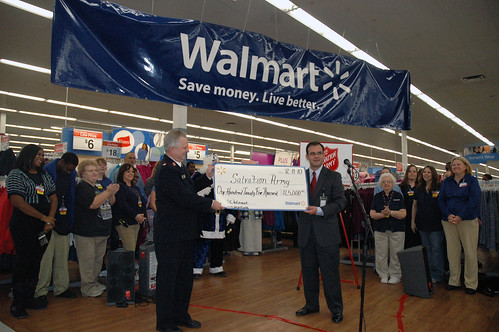 INDIANAPOLIS, December 11, 2010– The Salvation Army today received a $125,000 contribution to assist with a new Youth Empowerment Initiative. The grant – which was given to the non-profit organization through the Walmart Foundation’s State Giving Program – will support the development of the program’s service components and support a camp for homeless and abused children.

“We are simply overwhelmed by the continued generosity of Walmart,” said Major Richard Amick, Indiana Divisional Commander of The Salvation Army. “This amazing gift will allow us to better serve the youth of our communities, and help them grow into tomorrow’s leaders. It will also give us the tools to equip these children in their efforts to give back to their communities and serve those in need.  To our long time partners and friends at Walmart, we say “thank you!”

The grant was presented to Major Amick of The Salvation Army during a check presentation ceremony held today at Walmart’s 96th Street store. Eric Halvorson, honorary chairman of the Tree of Lights campaign, was also on hand to give remarks.

“Walmart is very pleased to support The Salvation Army, and are committed to helping those in need in the communities we serve,” said Jason Wetzel, director of public affairs and government relations for Walmart in Indiana. “Through this grant, we are hopeful that the youngest citizens who face hardships will find an opportunity to “pay forward” through volunteerism and service, the assistance their families receive.”

To be considered for support, perspective grantee organizations must submit applications through the Walmart Foundation State Giving Program’s online grant application.  Eligible applicants must have a current 501(c)(3) tax-exempt status in order to meet the program’s minimum funding criteria.  Additional information about the program’s funding guidelines and application process are available online at www.walmartfoundation.org/stategiving.

In the U.S., Walmart and the Walmart Foundation gave more than $467 million in cash and in-kind gifts in fiscal year ending 2010 (FYE10)—an $89 million increase over the previous year’s giving. At a time when food banks are being accessed more than ever, Walmart doubled donations to Feeding America, giving more than 127 million pounds of nutritious food to U.S. food banks, the equivalent of nearly 100 million meals. The breakdown for FYE 2010:

About Philanthropy at Walmart
Walmart and the Walmart Foundation are proud to support the charitable causes that are important to customers and associates in their own neighborhoods. Through its philanthropic programs and partnerships, the Walmart Foundation funds initiatives focused on creating opportunities in education, workforce development, economic opportunity, environmental sustainability, and health and wellness. From February 1, 2009 through January 31, 2010, Walmart – and its domestic and international foundations – gave more than $512 million in cash and in-kind gifts globally. To learn more, visit www.walmartfoundation.org.