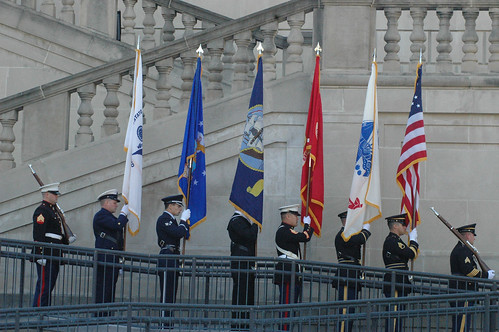 Color Guard at the War Memorial for the Veteran's Day service in Indianapolis, Nov. 11, 2010.

Short sleeves and sunglasses – not the usual attire for Veteran’s Day. It was for Veteran’s Day 2010 and the warm weather drew hundreds to the north steps of the War Memorial for a tribute to veterans from all branches of our military. Indiana’s Divisional Commander, Major Richard Amick opened the service in prayer, for the young and old who came out to celebrate what keynote speaker Robert Spanogle called, “…the people who made victory possible.”

The Salvation Army’s Doughnut Girls were there to serve those being celebrated, as they are at as many military related events as possible. Unique to the Indiana Division, the Doughnut Girls show up dressed in authentic uniforms ready to offer encouragement and coffee to veterans and other attendees. One African-American veteran stopped by to share that during tough times during segregation, “The Salvation Army came to our family’s rescue. They were the only ones who would help us.” Stories like this one are often heard at similar events and the familiar presence of the Doughnut Girls seems to bring them out. The Doughnut Girls are known for serving doughnuts and coffee to the troops, even on the frontlines beginning in 1917. We can consider these women and their sacrifice to be among Mayor Ballard’s description of  “ordinary people accomplishing the extraordinary.”

After a powerful message from Robert Spanogle, the civilian aide to the secretary of the Army-Indiana, the Indiana Air National Guard 122nd Fighter Wing’s “Black Snakes” made a dramatic flyover.  The 38th Infantry Division Band brought the service to a conclusion along with a final prayer from Major Amick which included a call for all citizens to love peace and be peacemakers.