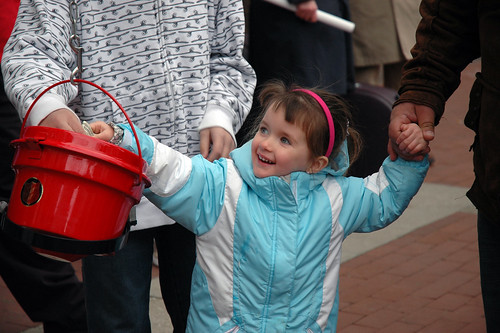 Even the smallest donors made it possible for The Salvation Army to reach its goal.

Indianapolis- Despite an economic recession, The Salvation Army finished its annual Tree of Lights fundraising campaign with success.  More than $2.77 million was raised during this year’s campaign which began November 20, 2008.  Over $789,000 of the goal was raised at the 140 Red Kettle locations throughout central Indiana.  The remainder was raised through online donations, mail donations, fundraising events, corporate donations, and other sources.

The campaign fell dramatically behind last year’s pace (as much as $182,000 at one point) and it looked as though the goal may not be reached. “From the beginning, the 2008 Christmas Campaign looked bleak for fund-raising because of the economy. Then we faced weather unlike what we have seen in some time for the month of December, especially the 23rd and 24th, which historically are red letter days for The Salvation Army. Just when it seemed that our Christmas goal was hopeless, that is when the hand of God began working to reminded us who is in control. Once again, The Salvation Army says Thank you to this great community for responding with open hearts and pocketbooks so we can continue our mission to those in need” said Major Dick Amick, Divisional Commander for The Salvation Army.

The Salvation Army also saw the effect of the economy on the people they serve.  “We’ve had more requests for assistance this year than we ever have before” said Jeff Stanger, Development Director for The Salvation Army.  “We thank God and the people of central Indiana for enabling us to continue to serve those in need in our community.  Despite a tough economy and an election year, people still gave generously and we are humbled by their kindness.”  The money raised through the Tree of Lights campaign will go to fund after school programs, homeless and domestic violence shelters, drug and alcohol rehabilitation programs, and summer camps and after school programs for kids.