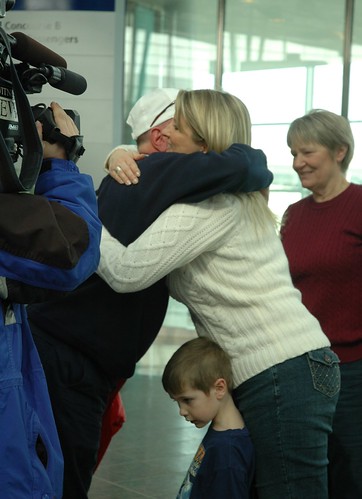 EDS Director Jerry Larsen gets a hug from his daughter upon arriving at Indpls. International Airport on Sunday, February 14, 2010.

For four weeks Jerry Larsen and Capt. Geff Crowell lived and worked amongst a nation of desperate, hungry, injured and dead. They were part of an international team originally sent to Haiti on a two-week rotation to assist with logistics and food/water distribution. Those two weeks turned into four when it became apparent that their skills were urgently needed for that additional time. It meant being separated from their spouses, children and grandchildren for longer than had been anticipated. “It was the longest we’ve ever been apart”, said Capt. Crowell. How timely then, that flight arrangements called for the men to return home to their families on Valentine’s Day! When the men arrived this afternoon at Indpls. International Airport, they were met with flowers, a handmade banner and plenty of hugs and smiles.

While glad to be home and excited to see their loved ones, Capt. Crowell reflected, “There is still lots of work to be done.” Over two million meals have been distributed by The Salvation Army in Haiti, as well as 500,000 gallons of water, tents and other aid. “Having been in Haiti for 60 years and having a footprint there has allowed the Army to make a lot of progress post- earthquake” added Capt. Crowell. “It felt a lot calmer than when we arrived. The people are starting to get back to normal. They’re in survival mode.”

Both Capt. Crowell, and EDS Director Jerry Larsen have served in other worldwide disasters. In comparison to those previous experiences, Larsen says, “I’ve never seen anything like it. It’s the worst I’ve ever seen. They’re going to be dealing with it for a long time.”

Exhausted from what was certainly an emotionally and physically draining time in Haiti, both men described their time with the people with obvious compassion. When asked about his assessment of the spirit of the people in Haiti, Larsen teared up as he stated, “The resilience of the people was amazing…just amazing.”

Local Disaster Service responders will continue to be deployed to Haiti during the recovery period. This week, Lt. Jonathon Fitzgerald from the Bloomington corps left for Port au Prince on a 30-day deployment. The Salvation Army continues to meet needs in Haiti not only with meals and water, but also by treating an average of 300 patients a day at their clinic, which is being staffed by an international team of doctors and nurses. At the Salvation Army clinic, staff and volunteers were able to witness the first baby being born after the earthquake, and most recently provided the initial treatment for the man who survived 28 days buried in the rubble.