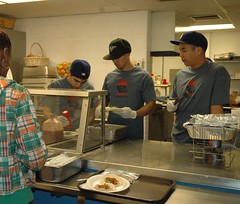 The guys from West Coast Tacos served dinner to the residents at The Salvation Army's Women and Children's Shelter.

Yesterday, after putting in a long night on the truck in Broad Ripple, the West Coast Tacos guys made their way downtown to serve dinner at our Women’s and Children’s Shelter. The guys, proudly wearing their Homelessness Bites tees, served up about 200 of their authentic LA-style tacos  to the ladies and children at our shelter as well as some folks who lined up in the alley.

When asked why it was important to give back, owner Arnold Park had this to say…”Even though we are a start-up and still in debt, the point is that our business is going and we wouldn’t be in the position we are now without the help and support of our community. Other businesses should remember when they first started and understand that they are in the position that they are in now, not because of their own works but through the blessings of God and other people who chose to give them business.”

The staff of West Coast Tacos, which included John Ban, Trent Davis, Adrian Caldera and Mike, were all smiles as dinner came to a close. Park summed up the experience by saying,  “Seeing people smile and saying thank you and enjoying our food is just a wonderful feeling!” He also wanted people out there to know, “You don’t have to be a ‘good’ person to do good things for other.”

We’d like to thank West Coast Tacos for “doing the most good” and giving of their time and tacos to make it a special night for families who’ve been through a lot. And we can’t forget the generosity of the folks at TKO Graphix (they’re the ones who logo’d up the taco guys’ truck) who presented a collection for the cause and will help make it possible for this kind of event to happen again in the future. Thanks, everyone!

We know you believe in our cause – to help our neighbors in need – and now you know that West Coast Tacos and TKO Graphix do, too. So, check them both out on facebook. Find out where the guys will be serving up tacos next and sample for yourself. You’ll be glad you did!