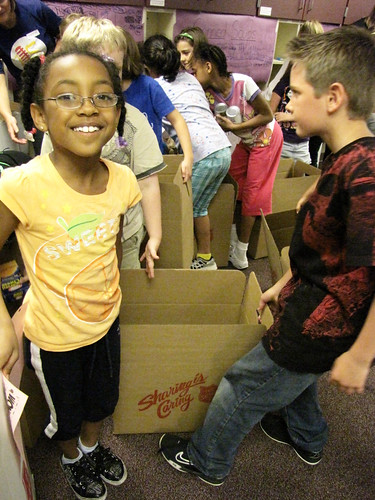 Two by two, third and fourth grade students at White Lick Elementary in Brownsburg walked around teacher Julie Copeland’s class room filling their Salvation Army boxes with goodies. The students have been collecting these goodies, consisting of non-perishable food items and a few toiletries, to be added to the boxes and sent to those in need.

More than 60 students helped with the food drive to achieve their goal of 80 care packages, which they will distribute themselves to residents of Booth Manor May 20, 2010. Booth Manor is an affordable Salvation Army-based housing facility for low income seniors. Also on this day, the students plan on performing a small talent show for the seniors, having a pizza lunch with them and helping Booth Manor with a work project.

Third grade teacher Julie Copeland says that the student’s desire to serve others in this way sprung from a book discussion the class had back in December. The book discussed was Fly Away Home by Eve Bunting, which tells the story of a homeless boy and his father who live in an airport. Copeland said that the book discussion led the students to consider what they could do to help others.

Accompanying the care packages will be a teddy bear and a note to the recipients from the students. On the front of the note it tell readers that they are cared for and gives a quote from William Authur Ward that reads, “If you can imagine it, you can achieve it; if you can dream it, you can become it.”