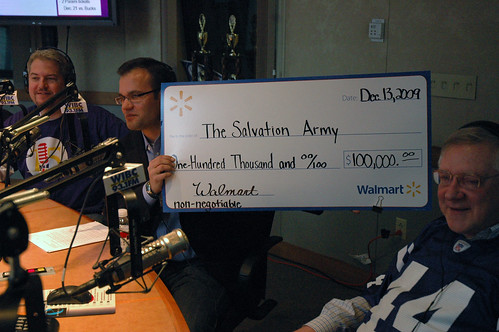 Many generous donors gave to the WIBC Radiothon this weekend, like Walmarts Jason Wetzel who presented a $100,000 check.

It took 55 hours and the support of many sponsors and volunteers who pitched in at the Emmis Communications building to raise the funds. Many generous donors called in after the request of WIBC’s on-air personalities to the ValPak and REACH magazines phone banks.

Many sponsors donated prize packages to be given away to donors. The last prize package given away at Radiothon was the Family Fun Pack with four Indiana Ice and two Indianapolis Zoo tickets and a $50 Marathon gas card.

The $255,146 raised was made possible by many. An especially generous and anonymous donor matched all donations on Saturday. Walmart wrote out a $100,000 check to the cause on Sunday. And many individuals called in from around the state to donate sums of $1,000.

Along with the money raised, The Salvation Army also took toy donations for Kids Toy Shop, which will be distributed to families who have applied for Christmas assistance this year during Tuesday, Dec. 15 through Friday, Dec. 18.