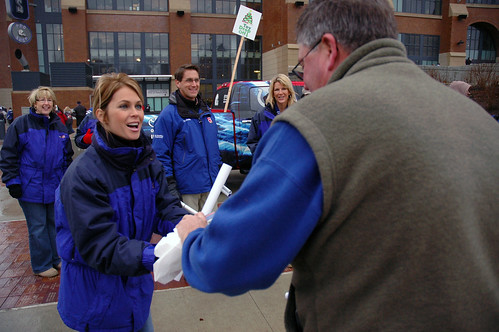 WISH-TV8s Angela Buchman collects a new toy from a Colts fan outside of Lucas Oil Staduim.

When you’re a Colts fan, a little wind and rain won’t keep you away from a big game.  Nor will it dampen your generousity, as was the case yesterday outside of Lucas Oil Stadium.

Thousands of Colts fans showed their team spirit and their caring  spirit as they donated over 3,000 toys to WISHTree, a partnership between WISH-TV8 and The Salvation Army.  The toys will be distributed to nearly 900 families in need this week during the annual Salvation Army Toy Shop.

Last year, over 13,000 toys were distributed to more than 900 families in central Indiana.  Although the number of families has gone down slighty this year, the number of children has gone up.  Many of those applying for the toy assistance were turning to The Salvation Army for the very first time.

In addition to the 3,000 toys, WISH-TV and The Salvation Army collected thousands of dollars in cash outside of Lucas Oil Stadium.  The money will be used to purchase toys for the Toy Shop.  If you would like to learn more about WISHTree, visit IndyWISHTree.org.